‘Yesterday, a student asked for a book on Emmanuel Macron. It will be delivered today, and I will be able to catalogue it within five minutes because SCIS is quick. I’ll have it in her hands this afternoon.’

Eltham College, a high-performing independent school in South East London, focuses on the core business of school libraries: providing access. Librarian Caroline Roche works in the senior school library, supported by a library assistant and a school community enthusiastic about the library’s role. Spread over three floors, Eltham College’s senior library provides space for students to study, read and gather during break times. In a library that prides itself on immediate access, SCIS Data contributes to their fast-turnaround workflow. 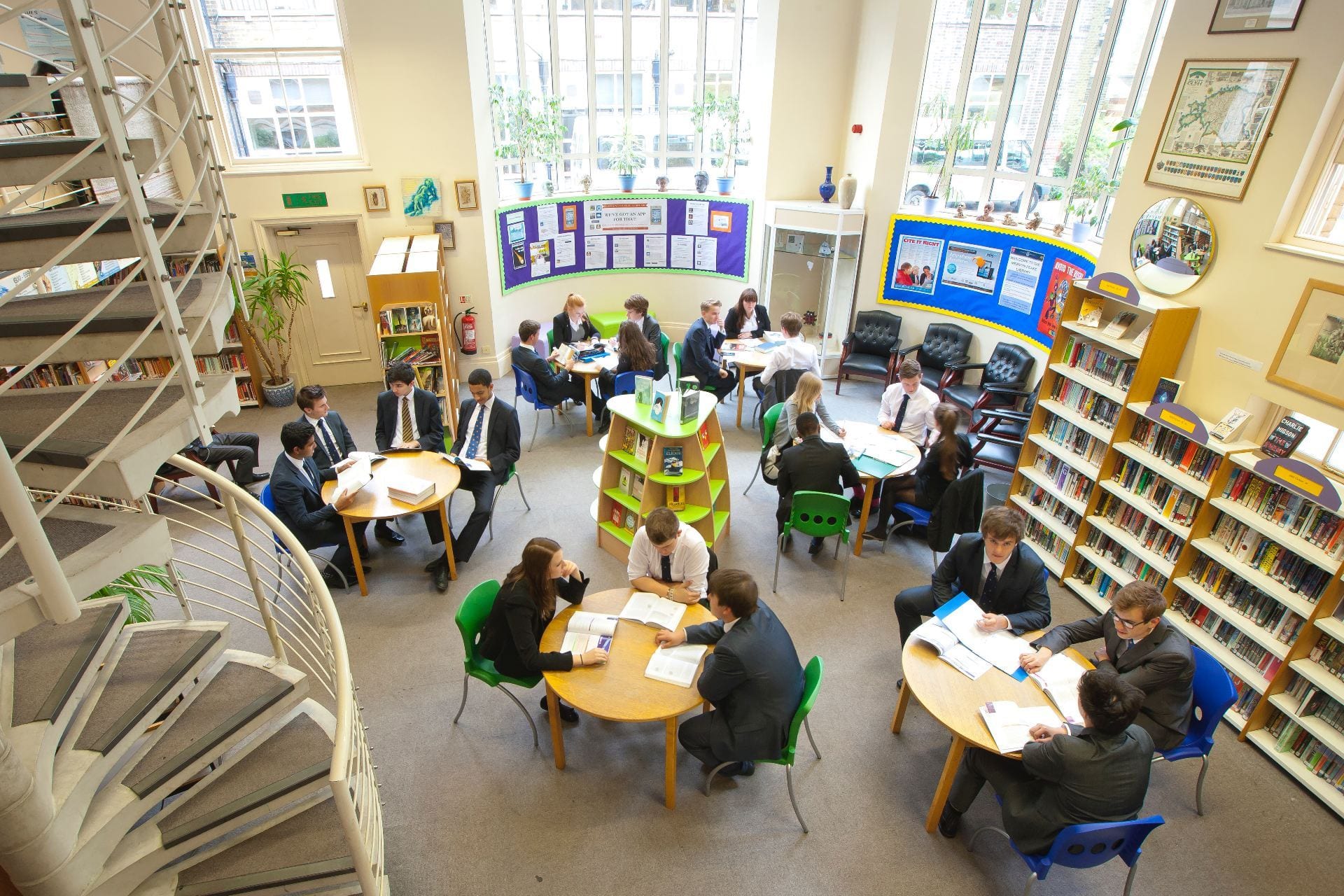 ‘When I first came here six years ago, the catalogue was a complete mess,’ Caroline begins. ‘A range of different library volunteers were allowed to catalogue, and you’d have several Dorling Kindersley books under four or five different versions.’ Caroline spent two or three years cleaning up the data. With over 34,000 resources now catalogued in their system, this was no small feat.

Caroline is clearly passionate about maintaining high-quality, consistent catalogue records, understanding that this allows the library to perform its key function: enabling users to find exactly what they want. Caroline previously downloaded catalogue records that were freely available through the national library (the British Library, in London), though was often frustrated by their lack of suitability to the school community.

Before using SCIS, Caroline performed original cataloguing for resources such as maps, and used the data supplied by her previous system, ‘although the keywords were weird, so we’d generally just scrap the keywords in them’.

Quality of records and a high hit rate

In 2017, Caroline trialled SCIS Data and, impressed with the quality of records and growing hit rate, subscribed at the end of her trial period. ‘I just thought it was brilliant, absolutely brilliant,’ Caroline says. ‘As soon as my trial expired, I bought into it. The ability to enter a book that SCIS doesn’t have a catalogue record for, and to ask for it to be done for you, is just great. I love that.’

Caroline states now that ‘SCIS has such a high hit rate, especially as you have so many English schools now. I would say the hit rate is about 98 per cent.’

SCIS Data integrates seamlessly with her Accessit system, which means that Caroline can search and import catalogue records directly within her library management system. ‘Cataloguing is just far quicker now,’ she says. This fast-paced process is supported by the high cataloguing hit rate in SCIS Data.

For schools frustrated by keywords that don’t reflect student usage, Caroline says that ‘SCIS will give you good keywords — keywords that suit schools rather than generic libraries, the British Library, or what the publishers have put in — that actually fit what students are looking for.’

Having keywords created specifically for schools means that Caroline no longer has to remove the keywords like she used to. ‘I generally keep the keywords that SCIS has suggested, so it’s much, much quicker,’ she adds.

Eltham College also subscribes to SCIS Authority Files, which links particular keywords and name headings, allowing them to make ‘See’ and ‘See also’ references. Caroline compares Authority Files to that of suggested searches on platforms like Amazon or Google.

‘When students are wanting to know where to go next,’ she says, ‘they find that really useful. Although I can make those connections myself, students aren’t necessarily used to thinking outside of what they think they are looking for. They’re not used to breaking down the search term, so that’s where Authority Files are useful. It prompts them to think about what they are actually looking for.’

Like the library itself, Caroline’s role is largely focused on providing access. ‘What I do is curation of resources and having exactly what they need when they need it.’

This means that students and teachers at Eltham College can expect a fast turnaround on requested resources. ‘Yesterday, a student asked for a book on Emmanuel Macron. It will be delivered today, and I will be able to catalogue it within five minutes because SCIS is quick. I’ll have it in her hands this afternoon,’ Caroline says. ‘Here, that’s the sort of thing they expect. So that’s what I’m here for: quick cataloguing and immediate response — to buy things as quickly as possible when the student needs them.’

Having access to SCIS Data keeps cataloguing time to a minimum so that Caroline can support the school community.

Caroline feels fortunate to work in a school where the library is valued by staff and students; she does not need to actively advocate for or encourage students to make use of it. A large part of her role is supporting sixth form students during their study periods. She also encourages the lunchtime use of the library, which is abuzz with students who are happy to come in to do their homework and chat among their peers.

‘It’s really good to see the boys reading books that stretch them, and the parents are very appreciative. Three of us run it together — the teacher from the senior school, the English teacher from the junior school, and me — and we have about 20–25 boys between the two schools. When the Year 6 students come here next year, they will already know people through the book club. They tend to be the quieter boys that like reading — perhaps the ones that are not are confident making friends. But, through book club, they’ve already made friends.’

A subscription to SCIS Data means that library staff like Caroline have more time to support their school community and offer enriching programs and services.

Caroline says that she would recommend SCIS to others — ‘and definitely everyone who has moved to Accessit’. She adds: ‘I think it’s great. It’s really, really helped my cataloguing.’

These interview extracts have been lightly edited and reordered where necessary to improve readability and clarity.

Nicole is the Communications & Projects Coordinator at SCIS. She is the editor of Connections, and is interested in advocating for school libraries everywhere. View all posts by Nicole